Have you ever had a life experience that seems to confirm that you’re on the right path? One of those situations that almost seems as if someone planted a word, a drawing, a song, or something that basically speaks to you to say, “keep doing what you’re doing.”

I can’t say that it happens all too often, but we have seen more and more of these little signs recently. For example, I was in Bali in July with one of my best friends Andrew Mortz. We were on the second to last day of our two week trip reminiscing on our adventure and thinking up ideas for the future. While discussing ideas of Andrew starting a restaurant or hostel/hotel abroad, the coolest-most-badass little Australian chick named Holly popped up to hang with us. Shortly into our conversation we discovered that Holly, only 19 years old, had recently moved to Bali to build a brand new restaurant from scratch, and was opening it two days later (the day after my departure date). She invited us to check out her place, and let us be the first to try her signature cocktails before the big restaurant opening. Before getting to her place, Andrew and I were discussing how interesting it was that Holly walked up and talked to us, as we were discussing a similar life plan for him. We walk into Holly’s beautiful new restaurant, and the place was stunning. A huge Ganesha statue, a pool, and little Balinese-style gazebos surrounded the place. It was absolutely inspiring to see what she had created thousands of miles from home, away from her family. We sat down at the bar and Andrew said, “dude, check out that poster behind the bar and tell me it’s not your mom.” I looked up and saw a colorful, retro poster of a blonde lady at the beach and the poster read “United Airlines—Los Angeles.” WHAT?!?! If you know The #1 Mother in the World, Penny Brill,  you know that she has been a dedicated flight attendant for United Airlines since 1977,  living and flying out of Los Angeles. Out of the millions of options of posters, paintings, and artwork, Bali Holly, from Australia chose to put this one, closely resembling Penny Brill, up on the wall at her brand new restaurant in Ubud. Call it whatever you want, but Andrew and I took it as a sign we were in the right place, at the right time, and it was a perfect culmination to our trip.

Flash forward about 5 months from my Bali trip- Sarafina and I have flipped our lives upside down and were arriving in Madrid, Spain to start our next chapter. In Madrid, we stayed at a super cool hostel, called Sungate One, and spent two nights there. I’ve stayed in many hostels and this one was pretty extra-special. The hostel crew did a great job of bringing people together with group activities, and a family style dinner every night for all of the guests. In a day and a half we met some really cool people there. To name a few- our dear roommate Anastasia from Argentina, our Engineering homie Nabil from Cape Town, and Adam- one of the super cool volunteers working there from New Zealand!

We bonded with Anastasia as we unpacked our bags together. Her mother had packed her dozens of Argentinian desserts (since she was missing Christmas) and she couldn’t give enough of them away to us- Sarafina fell in love with her and her sweet tooth.

We spoke with Nabil about traveling, work, and innovative ways to combine the two. We liked his philosophy about traveling- he does it “for moments, not monuments.” The sights and landmarks can be absolutely breathtaking, but it’s the moments that will fill your heart with warmth and your head with memories. The moment that you try to converse in broken english with a local (and might not have full understanding of one another), but can see love and kinship in each other’s eyes; the moment that you find out that you share mutual friends with a stranger on a bus that lives across the world; or maybe even the moment you’re invited to play soccer and drink some beers with the local boys. Nabil said that if time only enables him to see the number one historical landmark in a city or to potentially have one of these “moments,” he will ditch the monument every time.

Our long-haired Kiwi friend, Adam, that worked for the hostel, happened to have an awesome voice and guitar skills; he serenaded us guests from outside of our room and we were shocked with how talented he was! He told us that he, as well as two other hostel volunteers made a little band, Music for the Kitchen that sang in the streets of Madrid to make some extra spending money. Adam told us that the rest of his band was out of town when we checked in and it didn’t sound like they would make it back before we had to leave for Morocco. We stayed optimistic, but the timing made it sound like we wouldn’t get to see the band play. 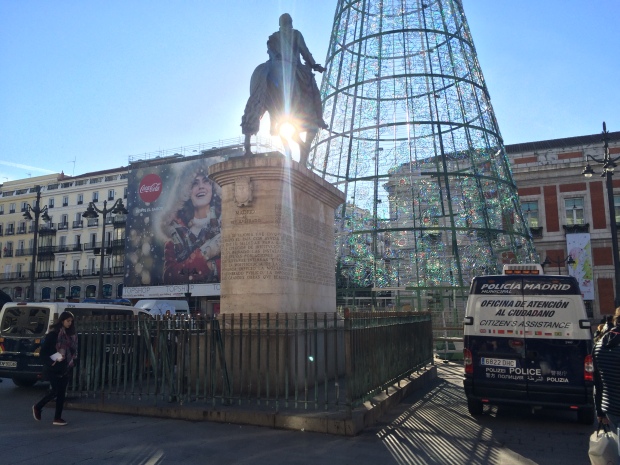 Though we only were going to be in Madrid for a couple days, it was the first time since we left my mother’s house in California that we felt like we weren’t in a rush. We spent a couple days really enjoying the Spanish culture. We told one of the volunteers at the hostel that we wanted to eat some authentic food, so he pointed us in the direction of an area that he called “heaven.” We sat down in a place with an all-Spanish menu and zero English speakers in sight (different than most places in Madrid); and let it be known- my Spanish can only get us so far… Just because I can read and say pescado doesn’t mean I know what kind of fish I’m ordering nor how it would be prepared, so I used the good ol’ point and pray technique. We ended up with some little anchovy-like (called Boquerones) that were fried but completely intact (heads and fins on, and bones in.) We didn’t know if we were supposed to eat them whole or bite around all their tiny little bones. It was an interesting meal….really good, but still interesting. And somehow, even with the smaller, European servings, we ordered much more food than we could consume. Our eyes were bigger than our stomachs. The paella that they served us as a starter, was fabulous…we almost wished we just went with that and the sangria. 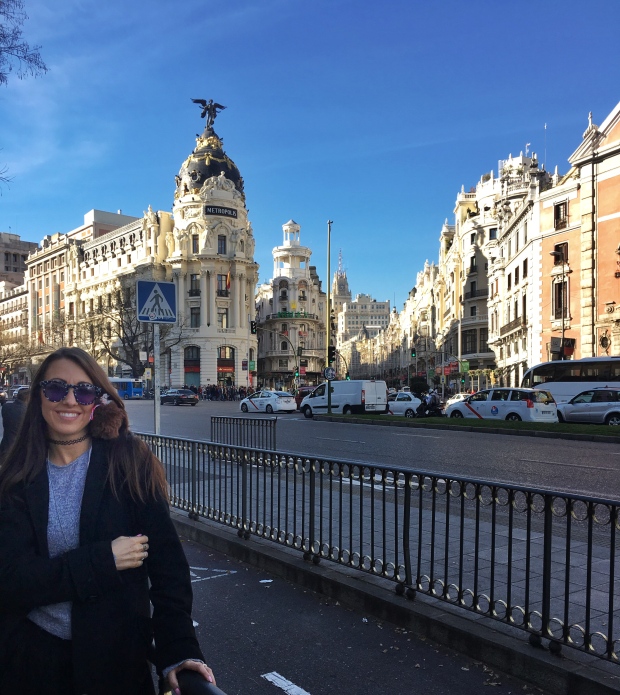 On our first night at the hostel in Madrid, the hostel had organized an outing with all the guests to local clubs. We all got together in the kitchen for a beer and then hit the town.  The hostel volunteer took us to a fun little dance club down the street. When we arrived, they were providing the whole club with a fun little salsa lesson, followed by a few Spanish two-step-style moves to the DJ’s spicy dance music. All of us were doing the two-step, but Sarafina picked it up fast and looked so good doing it, the little “class” turned mostly into everyone from the hostel  watching Sarafina as she tried to get everyone on board to dance with her and the staff.

One of our favorite things we did in Madrid was walk around the Buen Retiro Park. The parks are a great place to see the Spanish culture because it’s here that you can really notice the pace of which they live. You can find people- hundreds, if not thousands of people-strolling, lounging, or rowing a boat through the park in the middle of the week. I went to Barcelona years ago and noticed the same thing- huge, beautiful parks with tons of people relaxing and enjoying time with friends and family. We also spent some time at the top of the Circulo de Bellas Artes sipping on Sangria, taking in the views surrounding the city, making friends, and catching up on our journals. 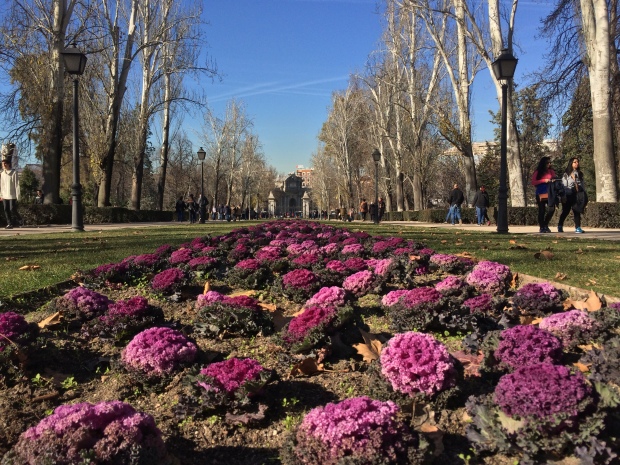 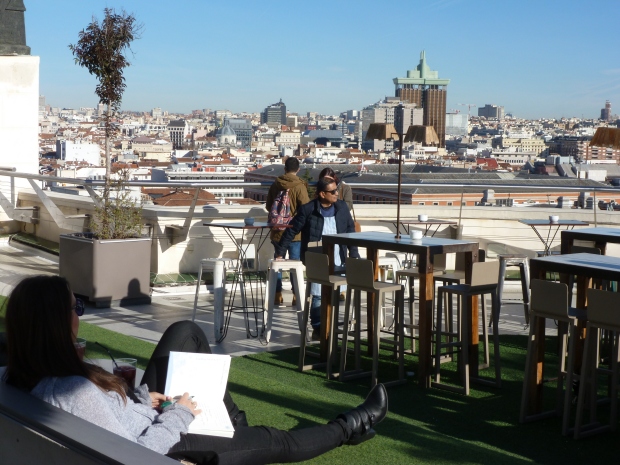 Our time in Madrid on this awesome day is what brings me back to the signs that we were on the right path. After getting some quality time together, updating our journals and reviewing our intentions at the top of the Circulo de Bellas Artes, we both had this wave of pure joy. A realization that this was going to be our lives for the indefinite future, and reminding ourselves that we were capable of manifesting our dreams and creating the journey of a lifetime. We were meeting people, experiencing new cultures, and starting a beautiful journey together. The Circulo was our last stop, so we headed back to the hostel with just enough time to grab our already-packed bags to get on the metro and jump on our plane to Casablanca. We walked down the street, on an all-time high to the Sungate Hostel, feeling happy and accomplished about our time in Madrid. We turned onto our street to see our guitarist-buddy, Adam, and his drummer, Chris (whom we hadn’t met) performing outside of the hostel with a crowd of people surrounding them. “Yes! We got to see them play after all !” The best part was they were playing their own version of “No Diggity,” which anyone who knows me well, knows it’s in my “top three favorite songs of all time”. Even though we really had no time, we danced and sang in the street for the whole song and then ran upstairs. As we grabbed our bags, I asked Sarafina if she thought it was as cool as I did that they played one of my all-time favorites? She agreed. Then, we ran back downstairs to catch the metro. We stepped back outside the hostel door to find the band playing “Brown Eyed Girl”, Sarafina’s parents’ wedding song. Seriously?!?! 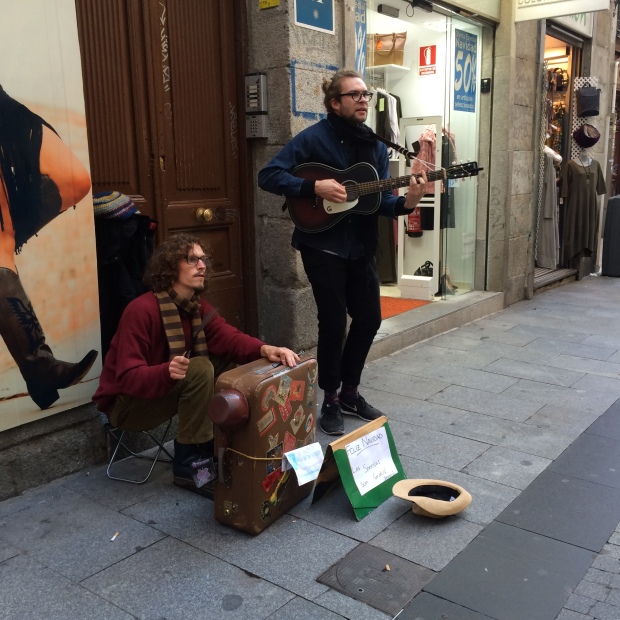 So, not only did we get to see them play, and not only were we riding this all time high, but out of the thousands of songs this New Zealand guitar player and Hungarian suitcase drummer could’ve chosen to play, they redid a 1990’s Blackstreet song and played a 1960’s Van Morrison classic that each happen to be our all-time favorites. You can call it coincidence, you can call us crazy, but we like to believe that when you’re in the flow, situations like this will present themselves.  With that, we jumped on our plane to Morocco and let our Manifestivities continue…

2 thoughts on “Madrid: Signs You’re On the Right Path”

Check out our latest posts! Go to blog →

It was nearly five years ago that we realized we were twitterpated and decided to “date the shit out of each other.” Read more →
%d bloggers like this: